Mr Gordon Green came to visit Malawi from Quesnel, Canada, not knowing exactly what to expect or what the Lord wanted him to do. However, he realized what the Lord had directed him to do, when he attended a church service in a semi-urban congregation.

The church, filled with joyful congregants, had logs for pews and no Bibles. Later that day, in the home where he was being hosted, a boy asked his mother if she could get him a Bible. Gordon was amazed that a young boy was asking his mother for a Bible and not a mobile phone. He then realized that the Lord had directed him to Malawi to give Bibles to those who needed to own a Bible but could not.

Ms. Masozi Chirwa, a banker who received a Bible said, “I am overjoyed that a stranger walks into our offices and give us with free Bibles. It takes a calling to make such a sacrifice. He could have spent the money on his own needs. This is a good lesson to me as a Christian and an encouragement that we should make Scriptures available to those who cannot afford to buy a Bible. This is an act worth emulating.” 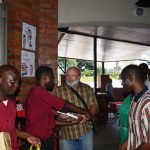 Mr Julius, who works at the mall when Mr Gordon was distributing Bibles said, “I am grateful for this gift. Many people struggle to buy a Bible because they cannot afford it because of economic problems. This is a precious gift because it changes lives.”

Mr Moses Andiseni from Namiyango township was all smiles when he received the Bible, saying, “I have an old Bible, but today I have received Revised edition of this Bible and it will help me in my study of God’s Word because other resources like the glossary and footnotes have been included in this Bible.”

Ms. Chirwa received Bibles on behalf of the staff at Standard Bank

However, his free Scripture distribution was not without misfortunes. On Friday, 27th January, as he was giving out Bibles with our Distribution Manager, Mr Herbert Chagunda, his wallet, which had all his money and credit cards, was stolen. He had planned to buy more Bibles the following Monday. All the plans seemed to have died.

But God, wanted Mr Green to finish his mission. As he was hanging around the shopping mall, wondering how abrupt his mission had ended, a cleaner came to him with his wallet. She had found it while cleaning the restrooms. All the contents of his wallet were intact, except for few Malawi Kwacha which were taken.

Mr. Green was excited that God had intervened and that he’d complete his mission.

The following Monday, he came to the Bible Shop to buy more Scriptures for distribution.

We thank God for sending this Scripture distribution angel, whose love for God and God’s people in Malawi has been manifested in complimenting the mission of the Bible Society – that people should have Scriptures in their hands.

Posted on February 8, 2017 by Bible Society of Malawi in News0 comments